A One Man Terrorism in Ethiopia 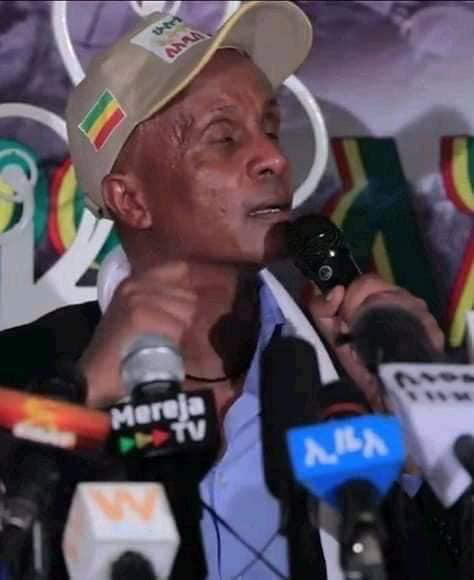 “I [am] jailed,” wrote Eskinder Nega in a letter to The New York Times, in which he proposed U.S. sanctions on Ethiopia and warned of chaos. That was in July 2013, and he was in Kaliti—the notorious Ethiopian prison. Mr. Nega is often described as an award-winning journalist because he once won a sympathy award from PEN America. It’s a cliché.

In a little under 5 years after the letter, the government set him free to roam the streets of Ethiopia. His release was one of the results of the persistent peaceful protests in Oromia (the most populous region in Ethiopia) which forced significant changes in the government. Youth from Oromia Region colloquially known as Qeerroo were protesting for at least 5 years at the time of his release.

One of his earliest arrests came after the 2005 election in which Berhanu Nega’s opposition claimed to have won elections in Addis Ababa. Eskinder Nega was accused of terrorism and was sentenced to 18 years of prison. His wife was arrested with him; he says she gave birth to their son in jail, in his letter to The New York Times.

In a tweet long after his release, Nega accused Qeerroo of terrorism. Government forces killed thousands of young men and women just for peacefully protesting. Yet Eskinder called them terrorists. He should have been grateful to them for securing his release. Some of his critics think he is vying for a supremacy of the Amhara ethnic group. I doubt that is the case. He doesn’t seem to have any serious agenda other than getting in front of a camera and sow discord among the public.

Nega’s attention-seeking behavior has gotten out of control that he keeps calling for press conferences as if he will announce a discovery of an alien planet, or a cure for cancer. It can be a challenge to figure out why attention seekers do what they do. It’s just like figuring out an exhibitionist’s thrill of getting naked in the middle of the street. Rational minds cannot fathom why anyone thinks that’s a good idea. Perhaps Eskinder Nega gets bored with spending time with loved ones and wants to go back to prison—that might be the way he gets the satisfaction of being a hero. Or, he is just itching for another PEN America award.

I do not understand why he wants everyone to talk about him. I do not know why he seeks the cameras. He is not even an eloquent speaker. He is scatterbrained. His nervous word salad will leave you confused.

Ethiopian press is rewarding an unacceptable behavior. Just because one wanted to give a press conference about his dog doesn’t mean they have to flock to his side. Perhaps they are desperate for fillers. After a few stunts, they should have been able to ignore Eskinder Nega. There are many stories—with less drama to write about or to feature in Ethiopia.

His friends at Amnesty International need to take a chill pill. Eskinder Nega is no more a journalist even if he runs the opinionated and biased weekly bulletin named Ethiopis. People who sell opinions are not journalists. They are opinion merchants. Seriously, Amnesty International needs to get a life. We understand that the PEN America’s award carries a publicity, but sympathy must end at some point and objectivity should take over. They keep defending a man who formed a shadowy group to rule Addis Ababa.

In its latest tantrum, Amnesty International vigorously defends Eskinder Nega by claiming he is just opinionated person. Its East African Director, Joan Nyanyuki says “the police have no rights to stop press conferences.” May be so. I’m no lawyer but I can guess the police have every right to protect the public and disperse unauthorized gatherings—be it the media or the Balderas group. The huffing and puffing by Amnesty International seems off the mark here. Perhaps they feel attached to him just like a caring mother whose son has grown up and headed to college. She wishes he didn’t grow up and feels it’s her responsibility to take care of him, regardless. Eskinder has grown. They need to let him go. He has opinions, remember? He is no more an objective reporter who tries to see both sides. Let him venture on his own. He will live, I promise.

If Eskinder Nega wants a press conference, he should notify local authorities first and get a permission, or give his press conferences from his residence. I doubt anyone was blocking him from doing that.

While I do not think he should be jailed, the government should scrutinize his group. In addition, the government has a responsibility to protect the public. If his group doesn’t have legal documents to operate in the country, it should be ordered to cease to exist. This is not muzzling Eskinder Nega. He should be allowed to express his views as he wishes, which also means he should expect an equal and opposite reaction from other groups—fierce mocking, ridicule and more. I do not condone any violence against Eskinder Nega. He should direct his fans to be civil.

Mr. Nega formed Balderas to rule Addis Ababa while there is a legitimate government. This is a definition of terrorism—forming illegitimate groups and confusing the public. That’s a recipe for chaos. The Ethiopian government needs to know whom Mr. Nega is talking to when he is not talking to a camera—whom he is communicating with via email, messengers and phones. Is he planning a violent act by his Balderas group?

Update: A reader pointed out Eskinder’s wife and children live abroad. This piece implied he lived with them.