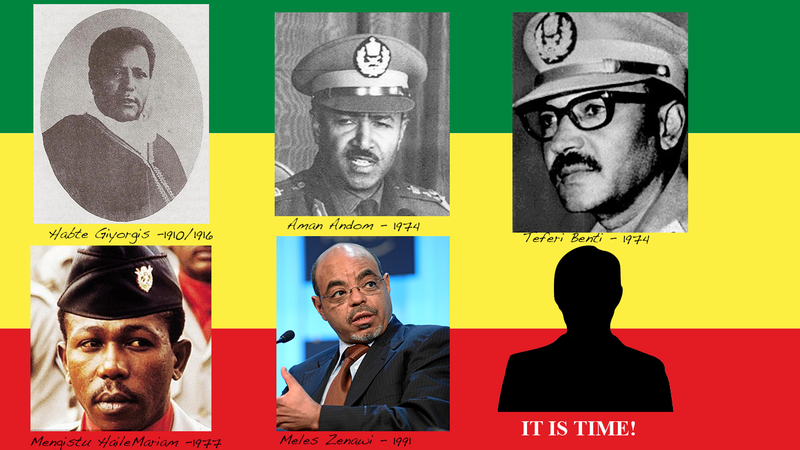 We are embarrassed to even suggest coup d’état in the 21st century, but one ought to live within his means. The one-man-one-vote motto is for the societies who could afford it; it is the Ferrari of Democracy. Ethiopia is not there yet. Military coup is still acceptable: just ask Abdel Fattah el-Sisi of Egypt. Moreover, expecting a regime that hasn’t ceded an inch to a democratic process for a quarter of a century would do so all of the sudden is a futile experiment.
In the year 2016, in any part of the world, military coup should have been a taboo. Unfortunately, Ethiopia has failed the democratic test miserably. In the latest sham election, Ethiopian People’s Revolutionary Democratic Front (EPRDF) won 100% of the parliament seats. The election gained a tongue-in-cheek “100%” support from the Obama administration.

Since Nov., 2015, Oromo people have taken their anger at Ethiopian government to the streets. Government forces killed hundreds of them in broad day lights, with no accountability. Thousands ended up in prison, including prominent opposition leader Bekele Gerba.
In what appears to be a spreading popular discontent with the Tigrayan ruling class, Amhara people joined their Oromo counterpart in protesting the dictatorship. Even though there is no apparent coordination between the Oromo and Amhara protests until recently, the Welkait community from the Amhara region started protesting in July of 2016 over land issues. Ethiopian government’s greed for land to lease to foreign investors has become a burning issue in all corners of Ethiopia.
In the last few weeks, Amhara protesters showed solidarity with Oromo protests, according to signs the protesters carried in Bahir Dar and Gondar.

Human Rights Watch, a Washington-based rights organization has condemned Ethiopian government in the strongest words possible, for killing peaceful protesters. According to Human Rights Watch, Ethiopian government has killed over 400 peaceful protesters.
International Media tried to highlight the atrocities happening in Oromia region. On Jan. 8, 2016, The Washing Pot Editorial chastised the U.S. government for repeatedly praising the brutal government of Ethiopia.
Despite the human rights organizations’ and Western Media’s plea, the United States and its European allies stood firm in their support for Hailemariam Desalegn’s government. While the West is worried about Al Shabaab and Eritrea moving into the potential power vacuum after EPRDF’s fall, Ethiopian people’s suffering under the oppressive regime has gotten worse. The people had enough, and they are taking their anger to the streets.

To prevent civil war and chaos, EPRDF needs to go. Unarmed peaceful protests have proved ineffective. The military, which has sworn to protect the nation from foreign enemies, has a duty to protect it from domestic enemies. EPRDF is a domestic enemy.
Military coup is the only solution! It. Is. Time.