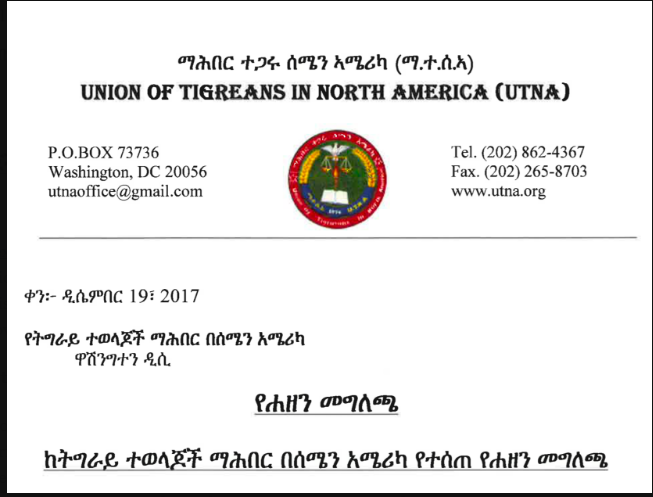 The interethnic clash between the Somali and Oromia regions of Ethiopia that started in August 2017 has claimed hundreds of lives and displaced hundreds of thousands according to local reports. Somali and Oromo people have clashed over resources in the past. According to Oromo activists, the latest clashes have been perpetrated by Ethiopian Government. Public commentaries on social media show the proponents of TPLF have been cheering for the Somali.

While it may be appropriate for Oromo activists to brush off social media trolls like Daniel Berhane who thrive off others’ reactions to their provocative social media posts, Union of Tigreans In North America (UTNA)—a diaspora arm of TPLF issued a statement in Amharic on Dec. 19, 2017. In the message it dubbed “message of condolences,” the union sympathized with the Somali ethnic group. In fact, it accuses the Oromo ethnic group without mentioning them by name.

According to emails exclusively leaked to OPride.com, Ethio Telecom—the only telecommunications provider in the country halted an SMS campaign to help Oromo people displaced by Oromo-Somali conflict at a request of high ranking Ethiopian Government officials.

EPRDF is a coalition of multiple parties ruling Ethiopia since the ouster of Mengistu Hailemariam, Ethiopia’s strongman until he was overthrown in the early 90s. TPLF remains to be the dominant party despite its representation of Tigray ethnic minority. The coalition government enjoyed the support of the three main parties representing a large segment of the country besides TPLF itself. OPDO, Amhara National Democratic Movement (ANDM) and Southern Ethiopian People’s Democratic Movement (SEPDM) have given EPRDF their full support until when OPDO and ANDM resisted TPLF dominance. OPDO members boycotted the parliament, which was followed by EPRDF issuing a statement acknowledging it’s in crisis. The members of the parliament who boycotted the assembly demanded an explanation for violence against civilians from Hailemariam Desalegn—Prime Minister since the death of the late Prime Minister known by the name Meles Zenawi.

Sporadic protests since early November 2015 in Oromia Region, the most populous and the largest regional state, have forced the Ethiopian government declare a state of emergency which ended in August 2017 after 10 months of enforcement.

Unlike the past protests which claimed hundreds of lives, the latest one in Naqamtee town, 318 km west of the capital ended. The protest in which young men and women appeared to be wearing black was to mourn the death of civilians in Chelenko town. The Naqamtee protest is notable for its peaceful nature and restraint from security forces.

Ethiopia cuts public access to social media from time to time to curtail a flow of information. The latest censorship comes in the wake of widespread youth protests, ethnic clashes and unease in the Ethiopian People’s Revolutionary Democratic Front (EPRDF) coalition.

According to Addis Standard, an English private magazine published and distributed by JAKENN Publishing P.L.C., Ethiopia restricted access to social media in response to protests on various college campuses. Protests sprung up across multiple universities in the country after special government security forces known as Liyu Police killed at least 15 civilians earlier this month in Chelenko, a town in Oromia Regional State.

Here is a rough translation of Mr. Kitessa’s post on Facebook regarding the killings in Chelenko town.

“The number of people killed by national defense forces in Meettaa District Chelenko town has reached 15. Oromia’s Regional Government strongly condemns these measures taken on peaceful civilians. Oromia Regional Government has dispatched a force to investigate the measures. We will let our people know the results of the investigation once it is completed. “Steps are being taken to bring people who committed this murders to justice.

“We wish strength for families of the victims.”

While the HornPost is unable to verify the authenticity of graphic images on social media posted by people claiming to be from the area, images of show gunshot wounds and dead bodies are making rounds on the internet.

Ethiopia has been an invaluable ally to the United States in a fight against terrorism and enjoyed a continuous flow of resources which strengthened the iron-fisted government. In the name of “fight against terrorism,” Ethiopia wrote a Draconian law which it’s using to jail peaceful opposition members, Ethiopia brought hundreds of terrorism charges against opposition members. These trumped up charges have become effective tools in blunting dissenting voices in this impoverished nation.

Bekele Gerba and Merera Gudina, prominent opposition leaders have been languishing in prison while the “terrorism” charges against them have stalled in kangaroo courts. Recent reports show Bekele Gerba is in a poor health and deprived of proper medical care.

Hailemariam Desalegn held an emergency meeting of with a group his top lieutenants also known as Executive Committee, for 18 days. Upon conclusion of the emergency meeting, EPRDF warned against group conspiracy, an indirect reference to rumored alliance between OPDO and ANDM. Some members of the parliament who announced their resignation months earlier withdrew their request for unknown reasons.