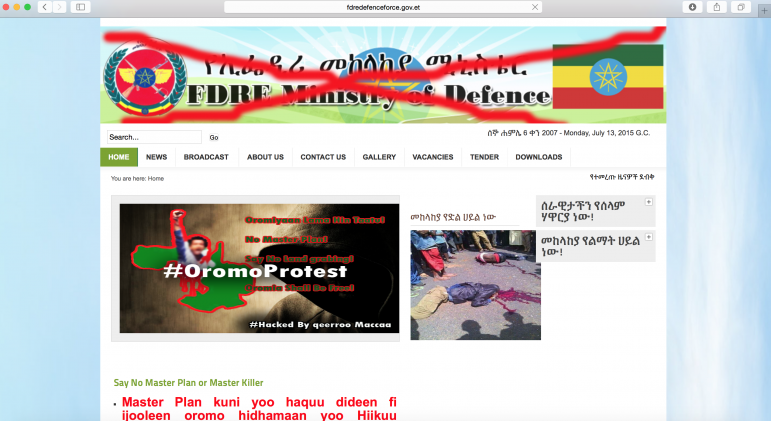 An unknown group hacked and vandalized Ethiopian Ministry of Defense website. Graphic images from the recent Oromo student protests were posted on the site.

Oromo students and farmers have been protesting Addis Ababa Masterplan, a plan to integrate the surrounding Oromia towns into the capital since late November. Ethiopian security forces have killed as many as 60 peaceful protesters, according to activists’ estimate, even though Ethiopian government admitted to killing only five.

In recent years, Ethiopian government has been in the news for hiring an upscale Italian hacker group named Hacking Team to spy on Ethiopian diaspora and journalists. The hacker group billed the government $1 million.

While Ethiopian Ministry of Defense boasts modern tanks and fighter jets, cybersecurity does not appear to be its strongest suit. The link to the hacked website started appearing on Facebook around 9:00PM EST. 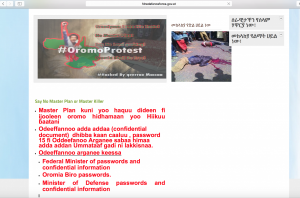 The hackers populated the government website with graphic pictures from the recent protests in Ethiopia, in which Ethiopian military mercilessly killed unarmed protesters.   “Say No Master Plan or Master Killer,” says a hyperlinked text. The hackers also claim they have amassed many confidential documents and passwords, according to the texts on the hacked site. 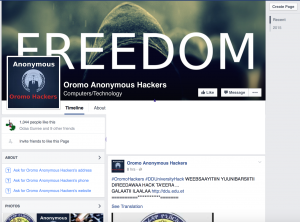 So far, no one came forward to take responsibility, but some people suspect recently created group under the name “Oromo Anonymous Hackers” may be responsible.